This is part of a special series, Indulgence, which explores extravagant living in a time of restraint. It’s also in the September 2021 VICE magazine issue. Subscribe here.

“What’s the point of liking something in secret?” Rax King says between bites of too-quickly-cooling mozzarella sticks.

We’re sitting in a corner booth of a dimly lit Red Lobster in Elmhurst, Queens. Outside, it’s a typical July night in New York City: impatient drivers honk their horns at an intersection while customers gather by an empanada counter; the muggy heat makes you hyperaware of how little personal space there is on city sidewalks. But inside the restaurant’s nondescript interior of dark wood and neutral-toned seating, the two of us, natives of strip-mall America, are back in suburbia. In front of us is a spread of the chain’s finest starters, the exact ones you can find in every location across America’s medium-size towns: craggy-edged coconut shrimp; chips with lobster-artichoke dip; and a basket of Cheddar Bay biscuits, of course.

“Tacky is the person who gets their belly button pierced on spring break,” says King, who wears a leopard-print face mask and a “bitch” nameplate necklace. “Nobody wants to admit to being that person.”

This is the crux of King’s forthcoming book, Tacky: Love Letters to the Worst Culture We Have to Offer, due from Penguin Random House in November. In the collection of funny, self-aware, and sometimes ugly essays, King examines her appreciation for the déclassé. We meet on this chain-filled stretch in Queens for exactly that: a night of tacky indulgence with a bang-bang-bang of Red Lobster, Olive Garden, and the Cheesecake Factory.

It’s not King’s first rodeo at Red Lobster. Despite better seafood options in the D.C. area, where she grew up, and her family’s preference for Buca di Beppo, Red Lobster was a place to celebrate special occasions. “I liked the lobster tank; I hadn’t quite put together what it was for,” she says.

Nostalgia-mining ventures are sometimes better in theory than in reality. The coconut shrimp is satisfying in the way fried seafood always is, and the mozzarella sticks are mozzarella sticks. As always, the biscuits make the whole visit worthwhile. We knew what to expect and we got it, which is what chain restaurants promise: an experience that’s replicable and reliable. In a time of constant financial, existential, and political anxiety, there’s a solidity in the unchangeable and comfort in the ability to make a choice that doesn’t feel like a risk. Still, King says, “Not as good as I remember.” Is any food you loved as a child ever as good when you’re an adult—or is it the memory that makes everything better?

As King bounced between D.C. and its nearby suburbs as a kid, tackiness piqued her interest early. She was eight years old when her mother slung the word “tacky” at her as an insult. Very soon, it seemed to her like “everything worth doing” was tacky, especially in high school when it became nearly synonymous with sex talk.

The tackiness King is interested in is that of “a kind of cultural underclass.” Learning to like things out loud, and especially the things that aren’t “tasteful,” is part of King’s origin story as a writer. Like many now-very-online millennial writers, King found her voice during the blog boom, writing on topics that seemed “unseemly or not to be discussed publicly.”

Her defense of cultural dregs struck a nerve, in particular her 2019 essay “Love, Peace, and Taco Grease: How I Left My Abusive Husband and Found Guy Fieri” in the literary magazine Catapult. In it, King writes about how she devoted herself to the Diners, Drive-Ins, and Dives cinematic uni-verse “with the single-minded purpose of a Talmud scholar” after the dissolution of her marriage. She writes: “Guy Fieri allowed me to ask: who do I fear noise and brightness for? Who do I fear food for? And he gave me the answer: I fear it for myself, and yet someday, I’m going to need to take those parts of me back.” It went viral multiple times.

Tacky is very much its heir—much of it laced with the smells and tastes of suburbia, as dictated by corporate offices and their multimillion-dollar R&D and marketing departments. In an ode to the Bath and Body Works spray Warm Vanilla Sugar, she writes about her desire to be “dessert”—tempting to men, and consumed by them. Through the synthetic corniness of Hot Topic, she writes about poserhood and fitting in. And mining the Cheesecake Factory, she explores her “fraught nostalgia” for American chains. 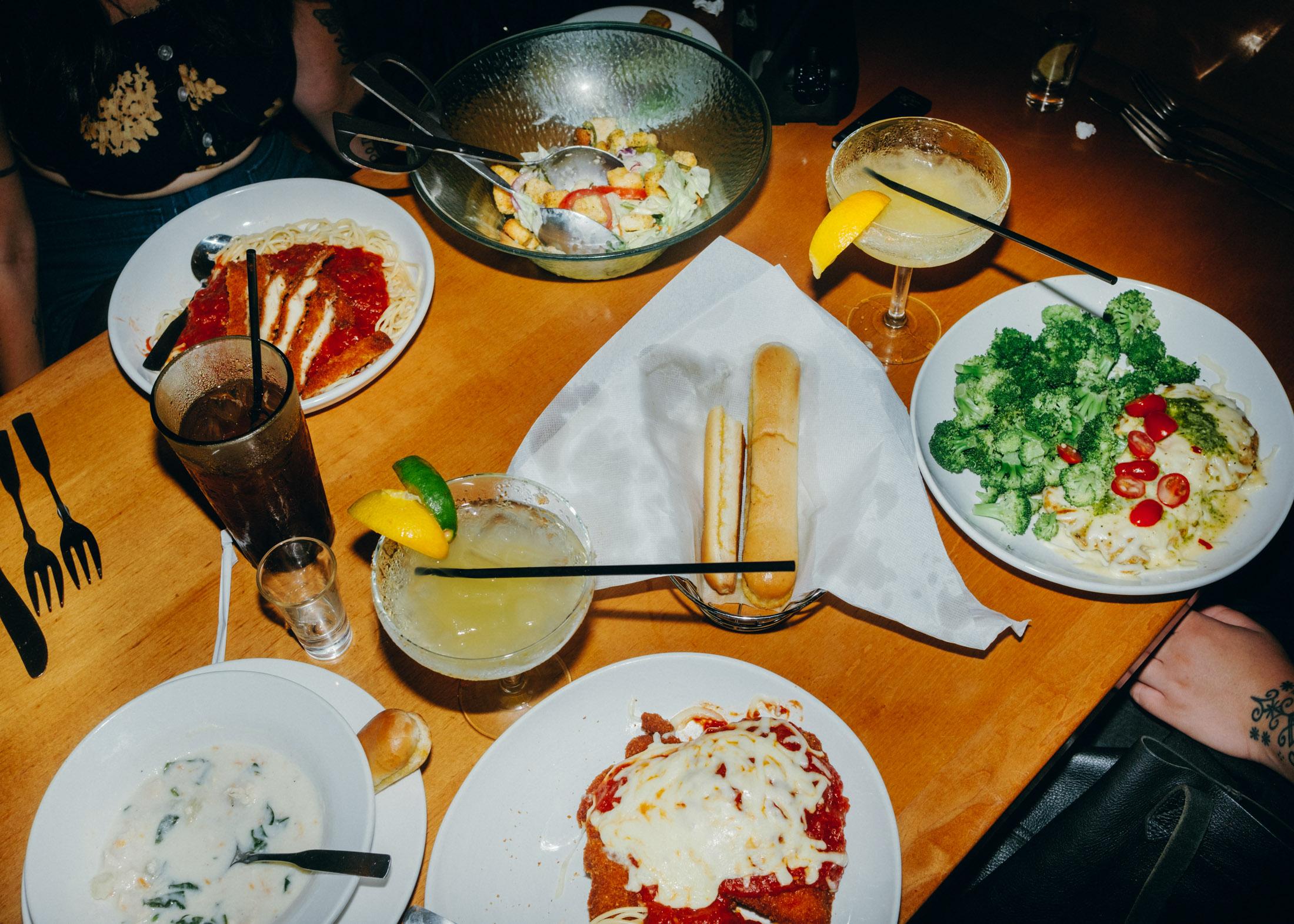 A short walk from Red Lobster is Olive Garden, an impressively large, stone-covered build-ing whose resemblance to an Italian villa is only in its outline. This Olive Garden shares a parking lot with a Longhorn Steakhouse, and it is a stone’s throw from a Cheesecake Factory.

Despite her appreciation of middlebrow brands in Tacky, even King acknowledges that these old chains are hard to love—a tenuous affection that follows many of us from suburban American childhoods. As a person who cares about labor, sourcing, the environment, and the looming threat of corporations dominating the American restaurant landscape, you’re not supposed to want to go to these kinds of establishments. There are better restaurants to patronize—ones that offer thoughtfulness, quality, and a sense of place—and there is ample reason to see chain restaurants as anathema.

The pull King and I feel toward the Cheesecake Factory and its ilk is one of rose-colored nostalgia, even if we can intellectualize about why we shouldn’t be interested. As King writes in Tacky, these restaurants offer a special experience that is achievable. You don’t need to live in a destination city or pay any mind to what the New York Times has deemed worthy of review to feel that you are being “cared for and waited upon.” These restaurants let anyone almost anywhere in America “play dress-up.”

That idea is undeniably sentimental: Even King doesn’t often go to chains in New York, she says, “unless I want to hang out in Times Square, which I do not.” Chains aren’t what most people come to the city for; they’re more like what you return to. “Sometimes I do have a craving for a Bloomin’ Onion,” King says. “It’s like being homesick.”

Unlike Buca di Beppo’s red-sauce kitsch (each location has a Pope-themed room), Olive Garden feels beige; the soup, salad, and breadsticks may be never-ending, but the experience has a surprising sense of restraint. King orders the unimpeachable combo of spaghetti and marinara topped with crispy chicken and served with a gigantic salad. I inadvertently choose the menu’s most ascetic main: The grilled chicken margherita, it turns out, comes with a heap of steamed broccoli and not the pasta one expects from Olive Garden. Though it tastes better than I expected, it feels wrong. 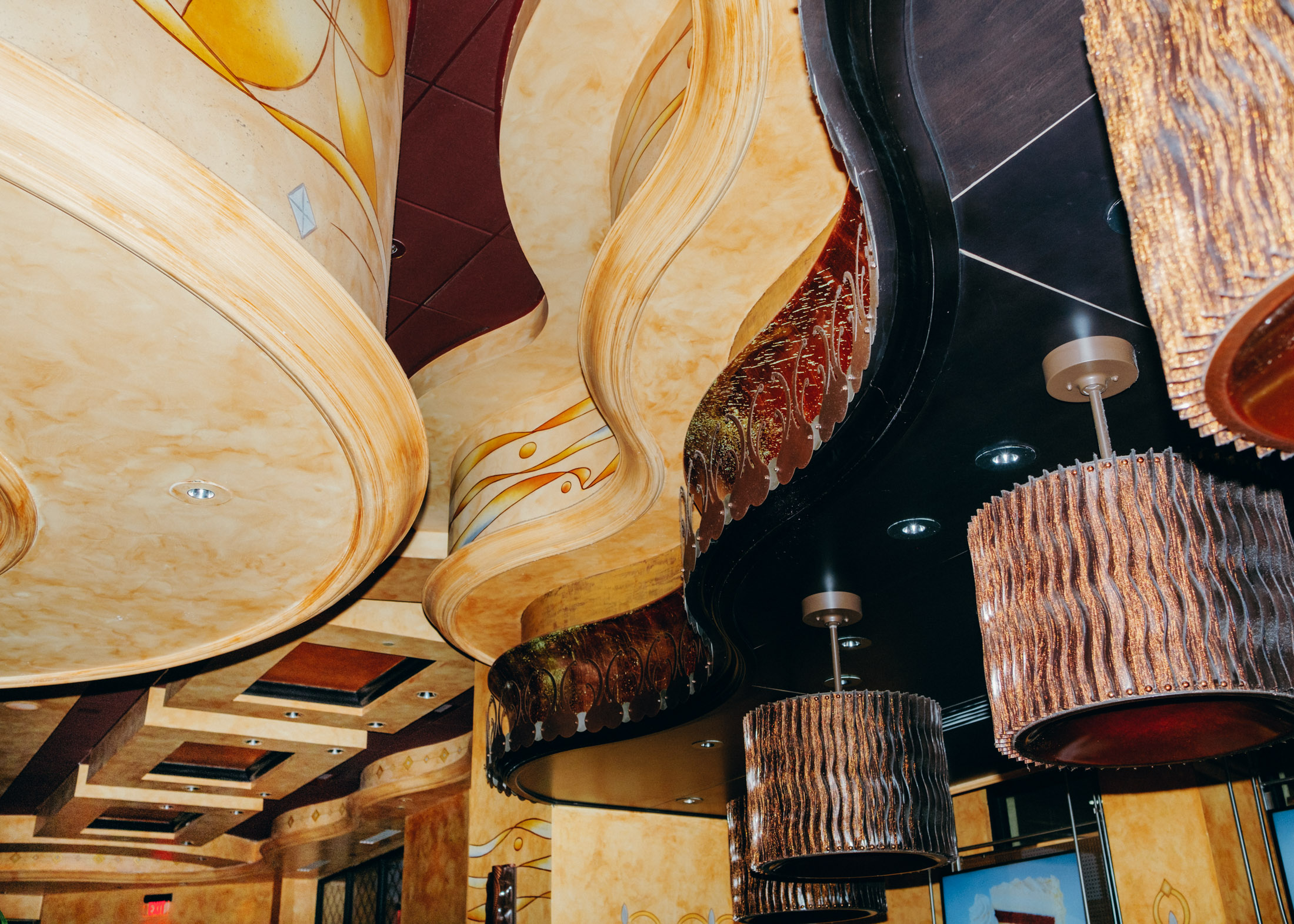 We walk into our last stop, doggy bags of Olive Garden in hand (a “detestable” act, jokes King), but it’s the Cheesecake Factory that gets the last laugh. It’s at least an hour-long wait until we can be seated, and even longer until brown bread or avocado egg rolls get dropped on our table. Can we even stomach it at this point?

Meditating on Olive Garden (King pronounces its food worse than Red Lobster’s), I ask her if chain restaurants are ever as good as we suburbanites remember them. “No…” She trails off, before perk-ing up again. “The Cheesecake Factory… It’s pretty reliable.” In Tacky, the Cheesecake Factory essay is titled “Exactly as Much Spinach-and-Cheese Dip,” a nod to the idea that every table is offered the same amount of dip. Arguably, nowhere in America is truly free from hierarchy—but within the Cheesecake Factory’s cavernous walls and amid its overwrought, opulent design, you can indulge in a fantasy. Unlike the old-school diner where everyone knows your name, the Cheesecake Factory offers the welcome comfort of being just another stranger.

“If there’s a lesson from tonight, it’s that they don’t need any help from douchebags like me,” King says. “They’re doing just fine.”

Dining out in America today is a minefield of conflicting values. This is one of them: that while we can eat out and give ourselves a good time, that experience of individual enjoyment comes with suffering at some point in the chain. The fact that our tastes were shaped by the machinery of corporate America doesn’t make our affection for these chains any less real, but it makes the uninhibited enjoyment that we took from them in our younger days increasingly difficult to chase. It’s harder, now, to like things.

Our night is not totally lost. We get cheesecake slices to go: the Godiva chocolate for me and the peanut-butter-cup slice for King. As full as I am from our meal, the promise of extra Olive Garden and that slice of cheesecake buoys me on the ride home.

Bettina Makalintal is an associate editor at Bon Appétit, and previously was a staff writer at VICE. Follow her on Twitter. 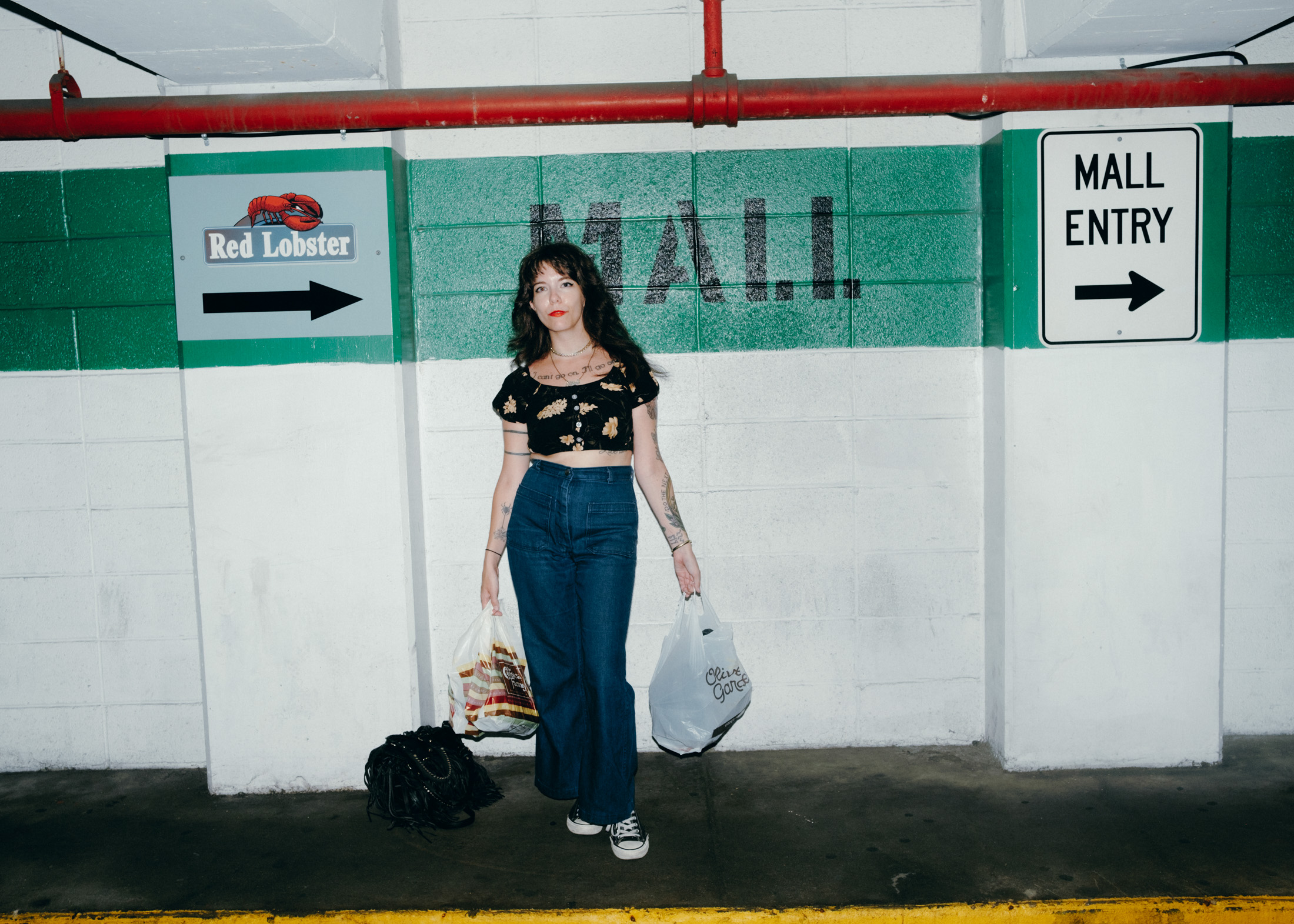