Turkey has the highest per capita bread consumption in the world, and pide is one of the country’s traditional stone-baked flatbreads. Usually the center of a pide is topped with deliciously seasoned minced meat, cheese, or vegetables, and it looks similar to pizza or khachapuri. However, during the month of Ramadan (Ramazan in Turkish), pide is made in a different style and often eaten to break the fast at iftar, the first meal after sunset.

The dough is coated in a yogurt-egg mixture or grape molasses, beautifully quilted with wet fingertips, and sprinkled with nigella seeds and sesame seeds. The pide are then baked on a stone in a hot oven, and the result is a pillowy soft, flavorful bread that you can tear apart along the grooves, dip in stew or olive oil, eat with cheese and olives, or even slice on the horizontal to make a sandwich. The bread is a little like focaccia but not as oily, and the toasted seeds on top add a distinctive flavor and texture.

Ramadan pide breads are so delicious that I’m eager to share the recipe with the Breadtopia community even though it’s not the customary time of year to bake them. The bread is available year round in some Turkish bakeries, and I began learning how to make a sourdough version of it from a baker on Instagram after Ramadan ended. The formula and process outlined below were inspired by @dishesfromafar who also pointed me toward the videos of @yusufozgurintepe.

@dishesfromafar used 15% whole grain rye flour in her formula, which I found utterly delicious — earthy and tangy. In subsequent test bakes, I substituted the rye flour with whole grain einkorn flour, which was also delicious and a touch sweeter, and warthog hard red winter wheat flour, which had a wonderful wheat aroma and flavor. 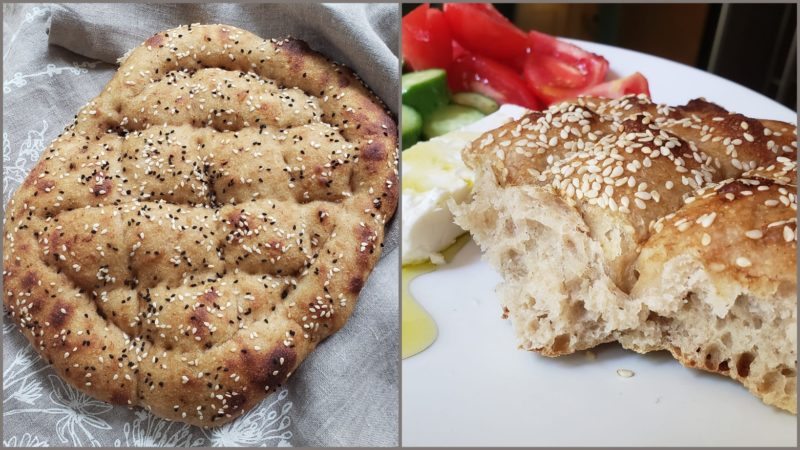 Pillowy-soft with an aerated interior

You can’t go wrong trying the recipe with any wheat variety or even only refined flour. If you use einkorn or warthog flours, you may want to lower the water in the dough by 20 grams. I didn’t adjust the water myself, and those two doughs were more soupy feeling than the rye, but they turned out great.

I made some other changes to the recipe that I learned: I didn’t have grape molasses so I used pomegranate molasses (diluted) to coat the dough. I went with an all-in approach to mixing, rather than holding back the salt for two hours, and I used less sourdough starter for a slower ferment. Perhaps in the winter when my kitchen is colder, I’ll double the starter and reduce that flour and water from the recipe totals. I also plan to try this gorgeous Kiymali Pide recipe (minced meat) soon, using the sourdough dough below. 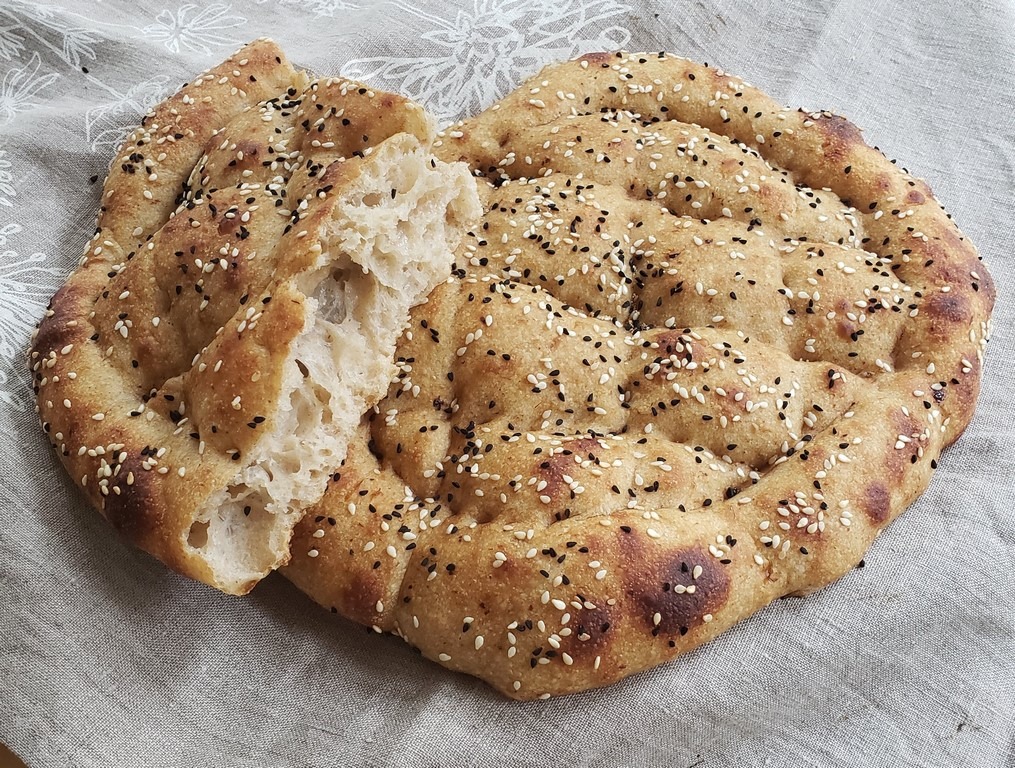 Turkish pide for Ramadan is a delicious airy bread with crackling toasted seeds covering the beautiful quilt-like crust. This recipe is particularly flavorful due to the addition of whole grain flour and because of the extended sourdough fermentation. The process itself is also quite enjoyable with a free-form final proof and hands-on creation of the beautiful crust pattern.

Melissa Johnson: Passionate bread baker, inspired by the science and art of sourdough.

2 Sisters from the same Mother

The Best Father’s Day Gifts for Dads at...

How to Make Honey Mustard Dressing

Hang Out With Us