How to Party in a Time of Restraint? Go All Out

This is part of a special series, Indulgence, which explores extravagant living in a time of restraint. It’s also in the September 2021 VICE magazine issue. Subscribe here.

“The first half of the year was absolutely awful. I got really dark,” Anya Sapozhnikova, co-founder of Brooklyn nightclub House of Yes, tells me of her pandemic year over the phone.

Not even a professional thrower, an expert at conjuring joy, could overcome the pandemic’s weight. For those whose lives and livelihoods were devoted to bringing people together—chefs, bartenders, DJs, nightclub promoters, and the like—the pandemic collapsed their professional passions under the threat of death by respiratory virus. But for some among them, like Sapozhnikova, it was ultimately clarifying.

“The second half, it actually became really amazing. I got really healthy and really organized and fell in love,” she says. “I think that my approach to nightlife completely shifted. Being confronted with mortality from every direction, it makes you value things in a different way and all the things that were superfluous and superficial can no longer take center stage.”

Earlier in the year, the rollout of COVID vaccines in America brought hopeful anticipation to many of gathering again for meals and concerts and dancing until dawn: a glimmer of normalcy on the horizon. Small, vaccinated dinner parties seemed like the interim step between pandemic lockdown and a carefree return to pre-Covid times. I wondered if the almond flour, bought who knows how long ago, was still good for a cake, and if I could even remember how to cook for a crowd.

That hope was promptly shut down as the Delta variant, which tore through India with cruel intensity, proceeded to rage across Europe, the U.S., and beyond, filling ICU beds in areas where vaccination rates and mask protocols were low. That feeling of triumphant hope, for many of us, gave way to exhausted resignation: We couldn’t breathe easily just yet, certainly not if we cared for young children, the immunocompromised, and those for whom no hospital bed was available because rising COVID-19 cases had overwhelmed the healthcare system once again. “Coronavirus Is Here Forever,” read the headline of a Sarah Zhang article in the Atlantic, and we would have to think about mitigating it. Things may not go back to the way they were, at least not immediately, but we could still live our lives with precaution. 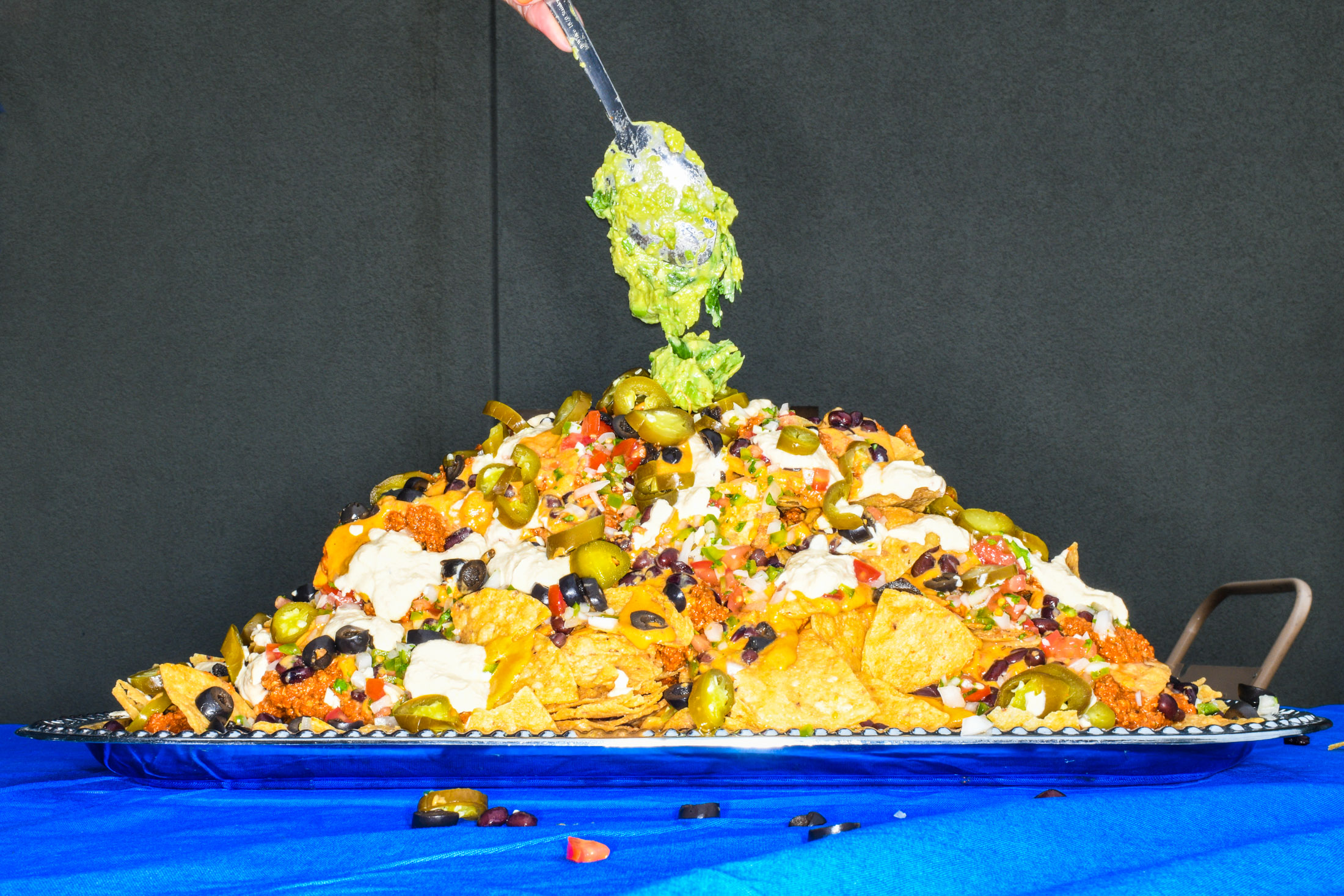 Partying is possible—and even recommended as a strategy, particularly with mitigation protocols going on more than a year and a half now. If the last year has taught us all anything it’s an appreciation of human company on a bone-deep level. (“When people find lower-risk ways to enjoy their lives, that’s actually a public-health win,” said Harvard epidemiologist Julia Marcus in the Atlantic.)

Throwing your own party (as opposed to going to an indoor restaurant meal or concert) actually gives you one more lever of control. Invite your vaccinated friends. Hold it outdoors. Ask that they get tested in advance if they’ve recently traveled. And just to be safe: before meeting with vulnerable people after a big gathering, quarantine and get tested. It’s all now common sense. 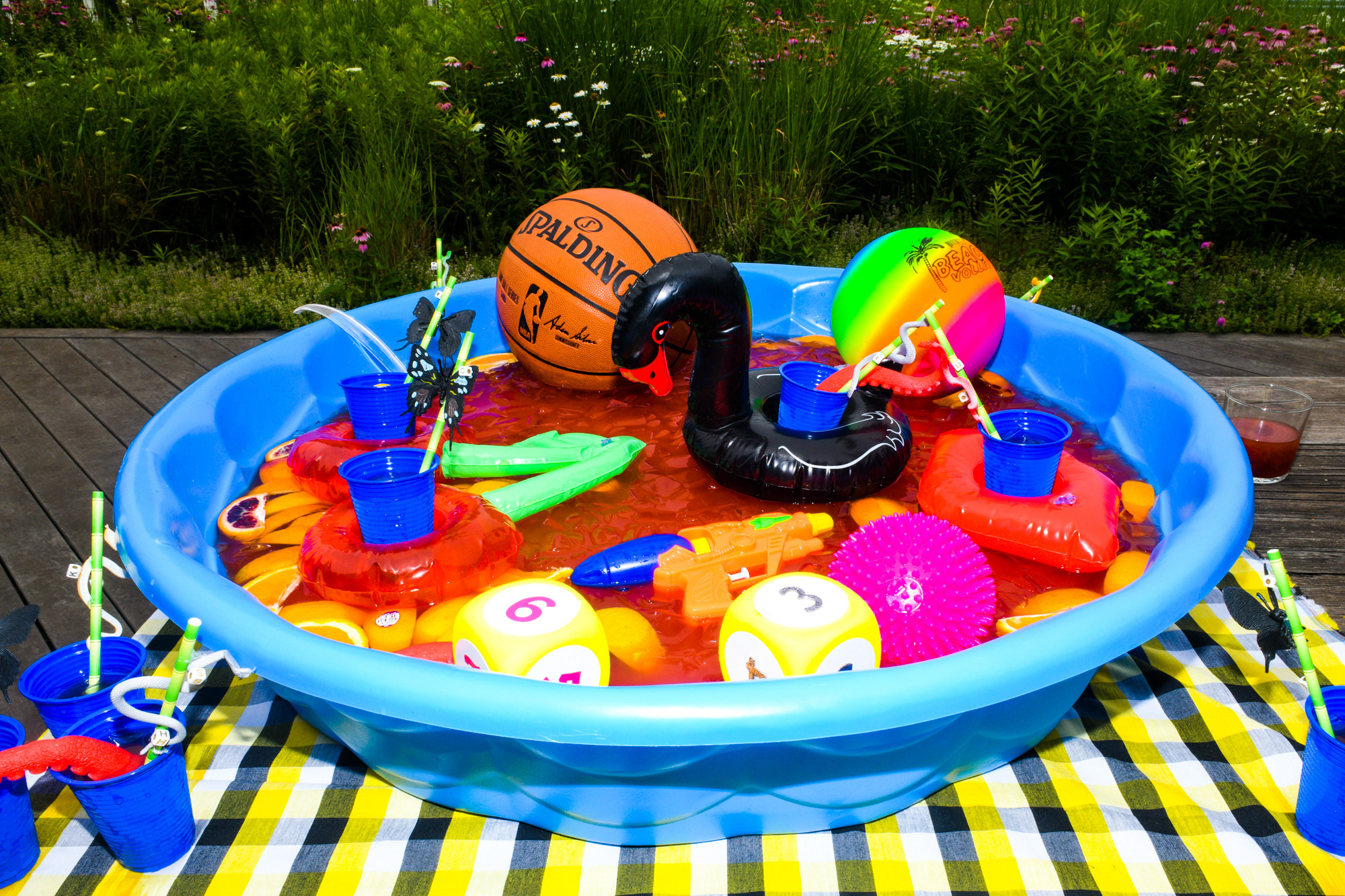 But taking basic health precautions doesn’t have to mean your party has to be an exercise in restraint itself. In fact, we think the very opposite is called for: an over-the-top extravaganza. With that in mind, we at VICE mapped out how to create the ultimate potluck for your next outdoor post-vax party. Farideh Sadeghin, the executive culinary director at MUNCHIES, nabbed our favorite New York City–area chefs to put together a bangin’ feast on our rooftop. We filled a kiddie pool—yeah that’s right, a kiddie pool—with a double-rum punch and swan floaties. We roasted and ball-gagged a whole suckling pig. And we made a joyous triple-tier cake decorated with multi-colored flowers, trippy mushrooms, and glitter cherries. And then we got tips from the greatest party-throwers in the business for putting on your best damn party.

Best, of course, is in the eye of the beholder. “To have a good party, you shouldn’t think ‘How do I create something impressive?’ Like who’s got the most money or the biggest dick?,” says Sapozhnikova. “It’s more important to make it as personal as possible. I think our society is shifting towards a more genuine way to celebrate.” We can only hope. 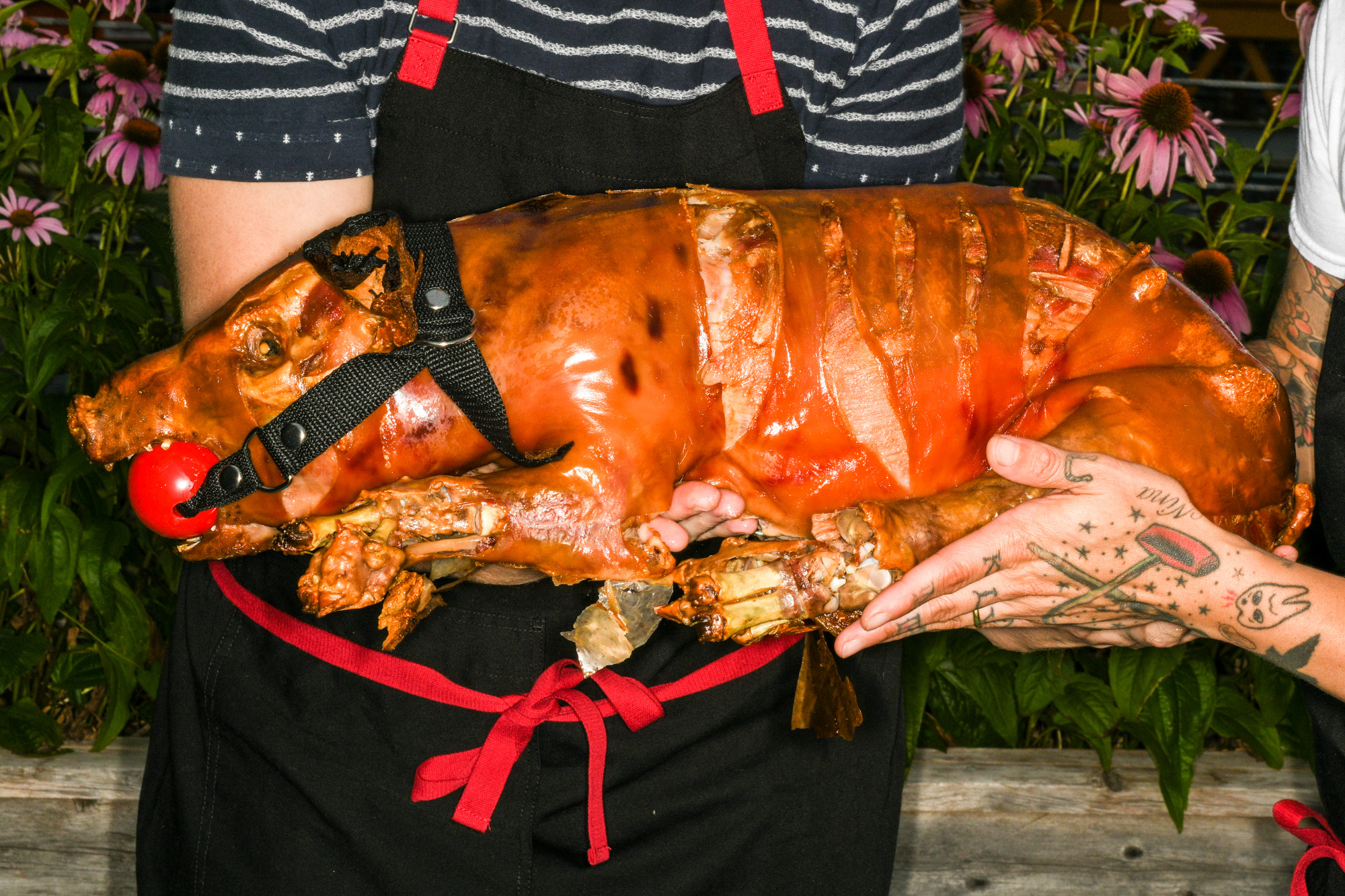 MUNCHIES POTLUCK MENU
Farideh Sadeghin, MUNCHIES executive culinary director, brought together some of our favorite chefs for our big-ass potluck. “Preparation is key: Make things ahead of time, and make a plan,” says Sadeghin. “Don’t be afraid to make a schedule for yourself in planning to stay on track.”

She also recommends spreading the workload around: “Delegate! Beforehand, during, and even after the party. This is YOUR party, and you need to enjoy it too, goddammit! Ask someone to bring ice and a cooler. Keep garbage cans handy so there is not a huge mess to clean up at the end of the night, or the next morning.” 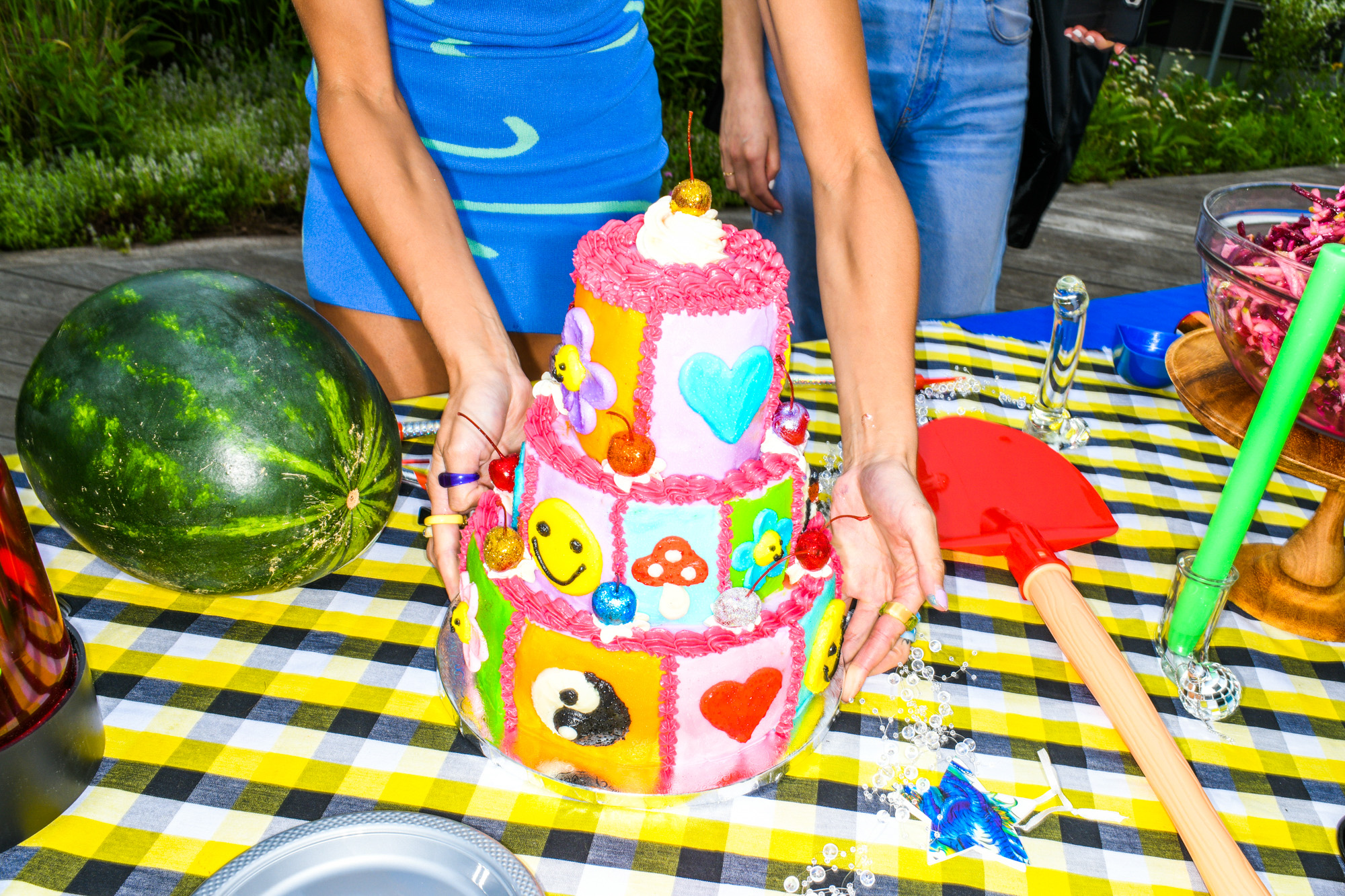 PARTY TIPS FROM PARTY PROS
No good party is food alone—that’s just catering for a crowd. So we got advice on setting the mood, picking the right music, and a few surprising accoutrements from some of New York City’s most legendary party throwers: Kae Burke and Anya Sapozhnikova of House of Yes; Eli Escobar of Tiki Disco; Ty Sunderland, formerly of Heaven on Earth at the late China Chalet; and James Spooner, tattoo artist, graphic novelist, and cocreator of Afropunk.

On setting the vibe:
“The most important thing to consider is how to make an event really engaging—getting a lot of people invested in a party through an activity that is easy to participate in. I once had a party at my house where everyone had to dress up like somebody else who was going to the party. It made a simple backyard barbecue into a very ridiculous and hilarious thing.” —Anya Sapozhnikova, cofounder, House Of Yes

“At China Chalet, I had a little plug-in haze machine that makes all the difference. It’s like $250 or $300. In clubs, it helps with seeing beams of light and laser effects. At a house party, it just makes it feel like everyone’s smoking cigarettes. You’re not in a living room anymore; it really takes you there.” —Ty Sunderland, formerly of Heaven on Earth at the late China Chalet

“Good lighting! Color-changing light bulbs that are remote controlled. Throw on some red gels. Put a cute scarf over a reading lamp. But kill the overhead lights. Candles are always sexy. Just be safe.” —Kae Burke, cofounder, House of Yes 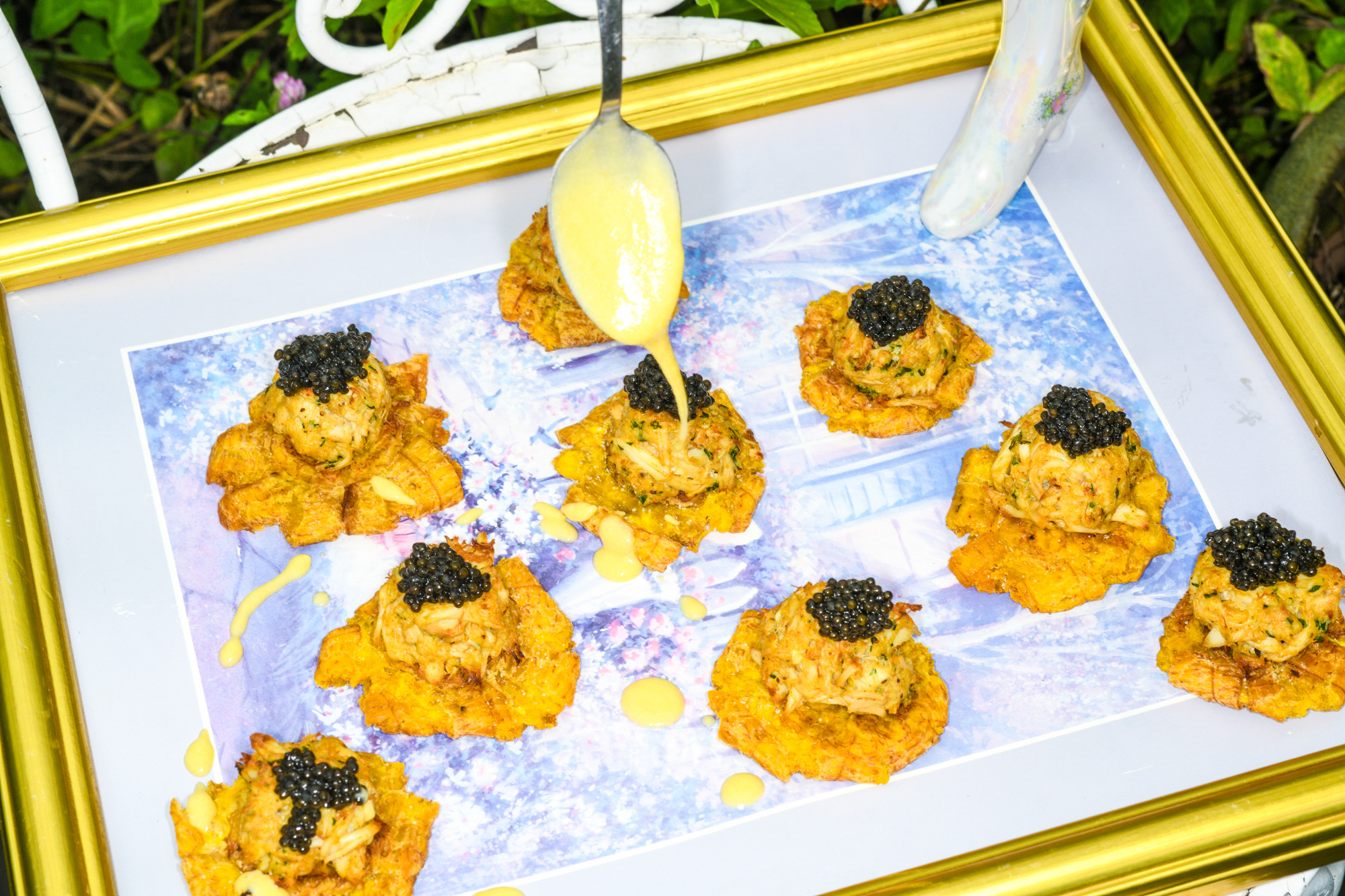 On guests:
“People is number one. The rest will take care of itself. Invite people who you trust to have in your home and who are also not going to invite assholes, you know? I’m looking for creating a left-of-center, queer-safe space—all of that stuff is important.” — James Spooner, tattoo artist, graphic novelist, and cocreator of Afropunk

“For me, I like diverse crowds, like age range, ethnic diversity, every other type of diversity. It makes for a good starting point for lots of intermingling.” —Eli Escobar, cofounder, Tiki Disco 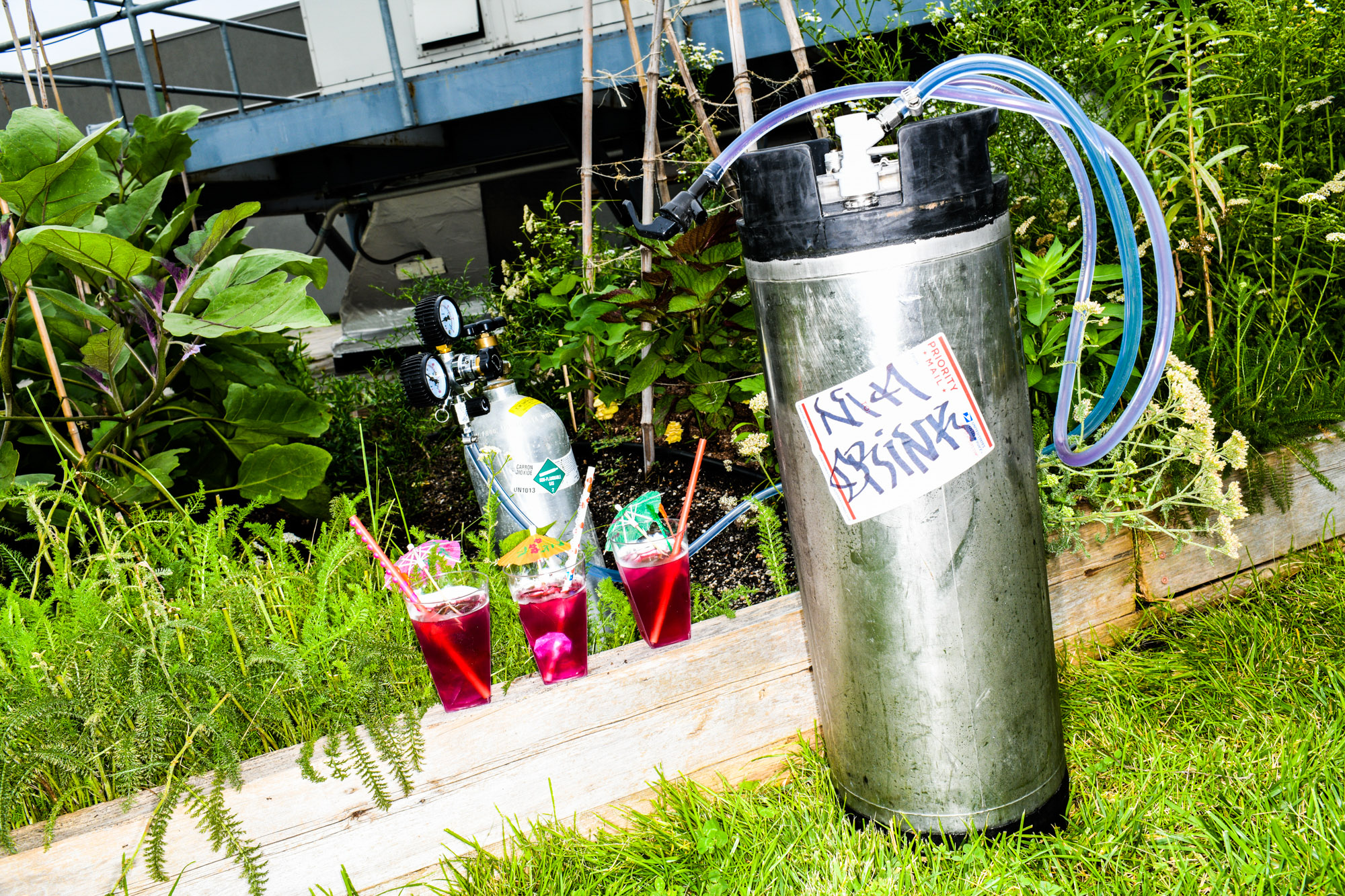 On the music:
“Play a diverse range of music and emotional music. Make some kind of an experience of the different range of human emotions.” —Eli Escobar, cofounder, Tiki Disco

“Put effort into finding or making a playlist. There is a huge difference between the start of the night and when things get amped up: one for eating, one that’s more turnt up. You could always ask a music junkie friend for some help. Or find a mix from one of your favorite DJs on Soundcloud.” —Kae Burke, cofounder, House Of Yes

“At a house party, you’re wanting to set good vibes—just start out with music everybody knows. You can take them wherever you want as soon as everyone’s sold on the idea of where they’re at.” —Ty Sunderland, formerly of Heaven on Earth at the late China Chalet

On the little details:
“Everyone runs out of ice. You can never have too much ice. I’m not drinking warm tequila. Like, that’s fucking gross.” —Ty Sunderland, formerly of Heaven on Earth at the late China Chalet